When James Hill, a former teacher of Pitman’s Shorthand, released his first booklet describing Teeline, nobody could be sure at the time, but he had finally done what hundreds of shorthand reformers had tried to do for a century.

He had finally liberated the UK from the clutches of Pitman.

Hill’s decision to publish that booklet was roughly equivalent to Darth Vader’s decision to pick up the Emperor and toss him down the reactor shaft. Seriously – think about the analogy.

I recently had the good fortune to acquire a specimen of this publication: Teeline: a method of fast writing. Who would imagine that such a small thing could do so much good? It’s little more than a pamphlet, 19 centimeters tall, 32 pages bound in glossy cardstock. The specimen that I obtained is the 1969 reprint of the 1968 original.

In the preface, Mr Hill insists that Teeline is a discovery rather than an invention. While researching the characteristics of good shorthand systems, he came to believe “that those essentials are actually latent in ordinary handwriting.” As the cover indicated, Hill refers to Teeline as “a method of fast writing.” He never describes it as a type of shorthand. (And to this day, the word shorthand is almost never used in Teeline book titles.)

After some introductory remarks he describes the now-familiar Teeline techniques of deleting as many vowels and unsounded consonants from words as possible. And then the alphabet appears.

The alphabet of ’68 was slightly different from today’s glyph-set. At the beginning of a word, d was written with a casual d that resembles a mirror image of Teeline b. The horizontal dash version of d was only used within words and at the ends of words. The letter f was usually written like a squashed numeral 8, but it became a single loop when blending with other letters. The letter n had two forms, one of which has become extinct. There was no separate symbol for z. The vowel indicators for o and u were slightly different from what we use today:

Eight pages of the booklet are devoted to a list of abbreviations for common prefixes and suffixes. There is a brief discussion of “special abbreviations” (a.k.a. logograms or brief forms) and “word grouping” (a.k.a. phrasing) and some clever ways to write numeric expressions such as “hundred thousands” and “and a half.” An appendix lists contractions for common words such as able, every, give, of and so forth. The majority of these have changed since the pamphlet was published. 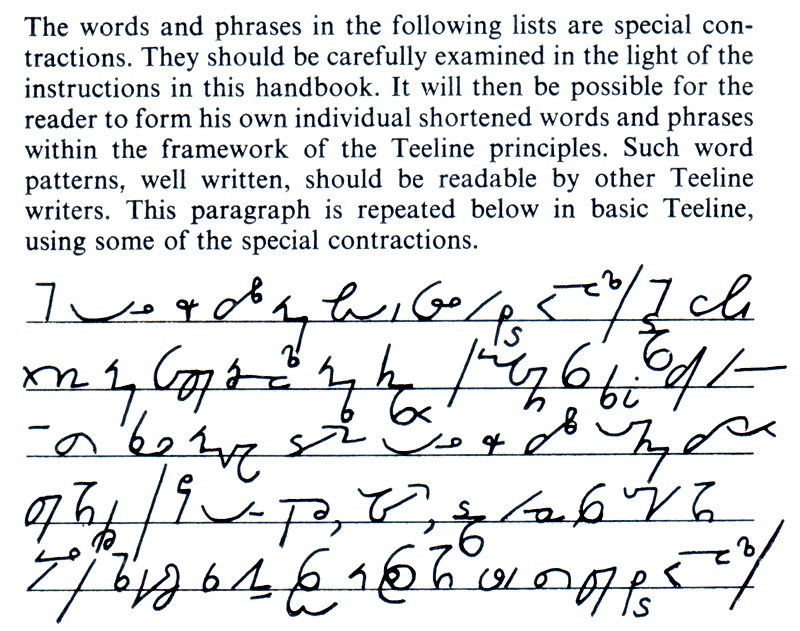 On page 32, Mr Hill notes that normal punctuation can be used, but “some fast writers” prefer to use a long slanting line rather than a dot to indicate the end of a sentence. I’m glad to see this because I’ve always thought the huge slash-mark which is currently trendy in Teeline looks absurd; now we see that the Founder gave use permission to use a proper period.

The book concludes with a rare treasure: a chart showing how to write two consecutive vowels in Teeline.

I’m very happy to have this precious, liberating book in my collection and I wanted to share those little glimpses with you, Dear Reader. Now I’m left wondering who governed the evolution of the system and how rapidly the evolution took place.